Task Force Recommendations to the People of Christ Church

The Dismantling Racism Task Force (members listed at the bottom of this page) began its work in late July 2020 as the Racial Reconciliation Task Force. The Task Force soon changed its name after reflecting on the historically slow progress made under the reconciliation model. The current state of racial injustice in this country has amplified past and present problems and urgently calls us to engage in creating lasting solutions. Reconciliation remains a goal for healing and is part of a larger need, which is to examine, become educated, and to take action to dismantle systemic racism.

The context of our use of the word “racism” is not limited to individual biases, conscious and unconscious. Significantly, the context also incorporates the system in which public policies, institutional practices, cultural representation, and other norms work in various, often reinforcing, ways to perpetuate racial inequity. Our use of the term “systemic racism” encompasses dimensions of our history and culture that have allowed privilege associated with “whiteness” and disadvantages associated with “color” to endure and adapt over time. Systemic racism is not something that only a few people or institutions choose to practice; rather, it has been and remains an endemic feature of the social, economic, and political systems that shape all of our lives.

Over the past year, the Task Force has met and also consulted with additional groups, churches, institutions, and individuals with the goal of formulating a proposed approach for Christ Church to adopt in defining and initiating our vital work of dismantling systemic racism. Dismantling racism takes intentionality and perseverance. It is a life-long, sometimes messy process but is so critical as we seek to live more deeply into our Baptismal call and ministry: to respect the dignity of all people. Our hope is that this journey will be deeply compelling and transformative to us as individuals and communally as a congregation: that we will become a church even more infused with love than we are now.

We are so grateful to you, the many members of Christ Church, who have expressed interest in participating with us in this most important work, and we look forward to engaging with you as we move forward.

An update to the Resource Materials booklet (link), initially published in October 2020, is being planned for the fall with the intent to expand the collection to include additional materials that enhance and inspire further education. We invite your participation in making this update and ask that you send your recommendations for books, videos, podcasts or films along with your review and comments to Charlotte Wooten at ch_wooten@yahoo.com by Sept. 15.

Here are some of the books task force members are hoping to read:

*Wilmington’s Lie: The Murderous Coup of 1898 and the Rise of White Supremacy: Join us for a  six-week study led by Stacy Arch and Jina Propst. In person (hopefully!) at Christ Church on Wednesdays from 7:00-8:15 p.m. Sept. 22 through Nov. 3. Theodore Roosevelt said “The more you know about the past, the better prepared you are for the future.” What if you didn’t know about the past? Or the past was distorted? In this book discussion we’ll journey through time to 1898, explore the truth, and hope to become better prepared for the future. Bring your thirst for history and thirst for community – don’t forget to bring your curiosity, and we’ll journey together. 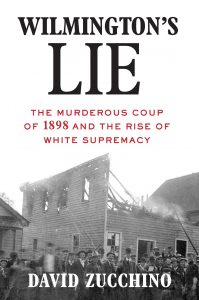 “Usually, when we read history, we at least have a cursory knowledge of the subject at hand. Sometimes, however, a book comes along that just surprises. How did we not know about this before? we ask ourselves. Wilmington’s Lie is such a book. After the Civil War, Wilmington, North Carolina prospered. It was the state’s largest city, with a busy port and a mixed race community that featured a burgeoning black middle class. But in 1898, a group of white supremacists decided to do something to turn back the page. David Zucchino’s well-researched book delivers an account of one of the few times a group of people has violently overthrown the government in this country. Although the violence that swept over Wilmington’s black community was later covered up as “a race riot,” this was a blatant act of racism, a brutal stab for power. We did not have to wait long for the first great history book of the new decade.” —Chris Schluep

To register, contact Stacy at stacyaarch@yahoo.com or Jina at jinapropst5@yahoo.com.

Civic Engagement and Advocacy: The Environmental Justice team is focused on the proposed Downtown South development project in Raleigh to build understanding of all components of environmental justice, including storm water management, community preservation, and gentrification. The team seeks to build capacity within our congregation for evaluating development, growth and change in our community and advocating for just use of our environmental resources. Contact: The Rev. Mary Davila

To view a video of The Rev. Mary Davila interviewing The Rev. Jemonde Taylor about potential impacts of the Downtown South Project, upon the people of Rochester Heights, click this link.

The Encouraging Place Small Group Opportunities: Christ Church hosts three diverse small groups through the Encouraging Place. The hope of these groups is for participants to form connections, share thoughts and feelings around race, and delve into some hard issues while having productive conversations around them. Some of the existing groups, currently gathering over Zoom, may have openings. Starting a new group may also be possible. If you are interested, please reach out to Kim Shirley at kimberlybshirley@gmail.com.

The Inner Work of Racial Justice: The Inner Work of Racial Justice group held its sixth and final Spring 2021 meeting on June 14. During our six monthly meetings, we discussed the book of the same name written by Kinston native and University of San Francisco law professor Rhonda Magee and practiced the mindfulness exercises described in her book.  We are discerning opportunities for other possible offerings in the fall.

Stay tuned for an upcoming talk from Virginia Theological Seminary about their recent embracing of paying reparations to descendants of enslaved people known to have built the seminary chapel.